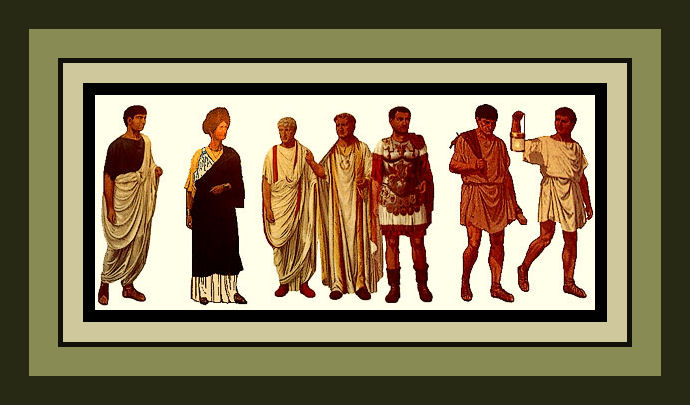 Roman dress differed from one class to another. The tunic was worn by plebians (common people), herdsmen and slaves was made from a coarse dark material. The tunic worn by patricians was made from white wool or linen. Magistrates wore the tunic augusticlavia, and senators wore a tunic with broad strips, tunica laticlavia. Military tunics were shorter than those worn by civilians.

Rings were the only kind of jewelry worn by a Roman citizen, and good taste limited him to a single ring. The ring often had a precious stone and made still valuable by the carving of the gem. The original ring was made of iron. Until late in the Empire, iron rings were generally worn, even when a gold ring was no longer the special privilege of a knight, but merely the badge of freedom. Usually these were seal rings used for ornaments. Such a ring was a device, which the wearer pressed into melted wax when he wished to acknowledge some document as his own or to seal a cabinet or chest.

Of course there were men who violated good taste in the matter of jewelry, as well as their choice of clothes and their hair and beards. It was not surprising to hear of a man with sixteen rings on a hand or six on a finger. One of Martial’s acquaintances had a ring so large that he was advised by the poet to wear it on his leg. More surprising is the ring was often worn on the joint of the finger for easy use of the seal.

Women wore a tunica which was adapted from the Greek chiton. The tunica was usually knee-length. Over this the women wore a stola which was a full length from neck to ankle, high- waisted and fastened at the shoulders with clasps. The stola was usually either white, brown or grey, though some were brightly colored with vegetable dyes. A shawl, called a palla, was worn wrapped around the shoulders and arm, or could be draped over the head. Cloaks were worn to keep warm.

Roman women were passionately fond of jewelry and great sums were spent on rings, brooches, pins, jeweled buttons, and coronets. From the earliest times, bracelets, necklaces, earrings, and pendants were worn by all that could afford them. Some had precious stones but goldsmiths made beautiful and elaborate pieces without jewels.

Most of the precious stones we have, except diamonds, could be found in the jewel box of woman of wealth. Pearls seem to have been favorites.

The Christian jewelry of the ancient world always reflected the humility that Christ preached.  Stunning bejeweled adornments were left to the high priests only while performing rituals.  The Christian jewelry worn by all believers in antiquity was that of very crude and simplistic design, only very rarely in precious metal.  The crosses of the Byzantine Period were predominantly bronze and sometimes lead.  The art style was highly stylized, typical for the Byzantine culture.  Depictions of Christ and Mary most often appear in the imagery on the Christian jewelry and coinage.  Since many of the Byzantine coins had religious inscriptions and images of Jesus and occasionally Mary, coins are sometimes found with holes punched through them having been used as a pendant in ancient times by an early believer.