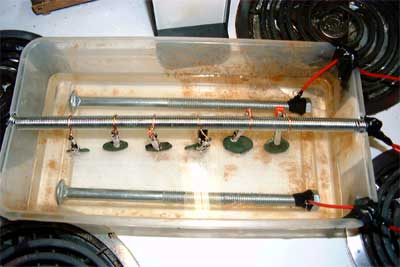 I used (2) one-half inch by 10 inch bolts.  I dunno if they’ll last as long as stainless, but they’re cheap and easy to get.  I just ran the thick copper wire right down to the bolts and wrapped it around em a few times, then wrapped it with electrical tape.  Very low-tech but it seems to work great on the 2 amp setting of my car battery charger.  Alligator clips with wires already on them can be bought in the automotive-electrical section of fred meyers.  They are called “jumper wires” and cost 1.50 for four.  Not bad.
PS: the rod on top (in the pix) which they are hanging from was originally a screen door spring, but that heated up too much from some resistance, so instead I found a steel rod in my basement that just so happened to be the perfect length and size. (ok, i borrowed it from a rock grinder hand-rest that I have).
I shock six coins at once, for about 15 mins… and it works.  I probably have enough room to add two more coins for eight or so at a time.
Thanks to Tom for the great idea!  Much simpler and more productive than my four seperate tubs idea. 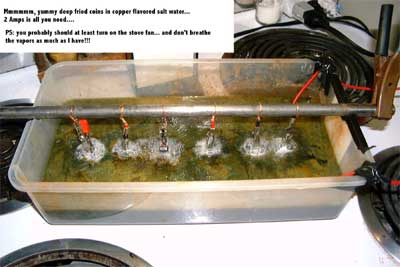 Membership is open, so come on in and join the fun!